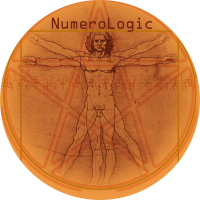 Based on his birthdate and his name.

Note: If these numbers say anything at all, then they might say something about the blueprint of a person. Who or what is he or she meant to be. The nature of the person. The nurture may re-direct a person in a total different direction or twist the inherent good in a person into something very dark.

He is inspired by Charity, his soul has this strong male sexual drive and he wants to manifest this drive in the world.

His intermediate number is 31 = Divine Guidance, Fulfilling Power of God

The basic idea is that a 31/4 manifests divine guidance. Brings spirit into manifestation.

Two major themes play in his life: Leadership and Relationships.

On leadership he is inspired by 14: Charity, with a double stress on 4, meaning being very practical in his charity. His inspiration is supported, counterbalance by 69 (with the 9 missing). 69 stands for involution-evolution, the eternal process of life. With double 6’s he has a very, very strong masculine (sexual) life force (drive). What he needs to develop is the missing 9 (wisdom, intelligence, communication) which would then steer this huge force.

With double 4’s on top and double 6’s below, there is a constant battle going between: what is Thy Will and what is My Will. The solution lies in the addition of this axis: 14+69=83/24th prime.

83 is the Messiah factor, the resurrection from the Cross. It means that in his leadership he will have to die and be resurrected again and again. He will find his focus through this process.

Relationships are dominant in his Pentagram (red double 6 to red 1) and he will be the dominant factor in his relationships, with a very high (double red 6) sexual intention in the relationships. Development of the Will (blue 3 missing) and the development of the Femininity (blue 8 missing) would make it more balanced. Should he do so, then there is still a highly sexual note – life enhancing- in the way his will approaches relationships, but it will be counterbalanced by dominant femininity, this ability to relate emotionally to others and overcome the polarity between opposites.

His emotional awareness is high. Were he to develop his self-awareness (7) and femininity (8) it would actually give him the ability to (re-)unite people around him, thus counterbalancing the strong 6 ego-drive.

The emotional triangle from 6, may make him over-emotional, reacting purely from emotions. The high ground here would be that he uses his 6-life force energy to balance power and manifestation.

His spiritual vibration number 31/4 becomes 41/5 in the physical world. 41 is the spiritual mountaineer. A person who can basically manifest anything he sets himself to. They also set very, very high goals. When mountain climbing they will only settle for the Mount Everest. Note well that such a goal is a long and arduous travel, one might fall off quite a few times.

When placed in the body picture it gives the following:

Triple activation of the 2nd point: This energy gives him the gift of thinking fast, of classifying things and situations. And to judge! Unfortunately however it gives also the ability to condemn; to fall into dogmatism and dogma. Should he do that, it would be fatal. This power demands to develop “and-and” thinking and not to get stuck in “either-or” thinking. Being loving instead of righteous.

Double activation of the 10th point: He has access to knowledge beyond the known. (Akasha Records) if he is able to focus on everything he is doing, 100%. So absolute devotion, total immersion. He should not just start things, but complete them. The opposite would be to scatter his attention all over the place, without focus and not complete anything. With double 4’s activating this point, manifestation will not be the biggest problem. He will be confronted with showing the deepest commitment and the biggest hardships.

5. On the name and the birthdate:

In the Pentagram the 5th and the 7th place have no numbers. This would indicate that he might have trouble grounding himself in this world. With the high emotional component of his pentagram, he might even loose himself in emotions.

The name Donald gives him very strong insights and inspiration, the will to be the center of attention. Trump makes him a factor of transformation, healing and wisdom. Donald Trump gives him this mastery in expansion.

It still doesn’t ‘ground’ him. Deep down in the number 37 there is the 5 and the 7 (and the 4 of manifestation), but still, it is deep down. So with all the superpowers present, the biggest challenge might be, to actually ground them and keep them grounded.

Many things the numbers indicate I can see happening with Mr. Trump. The one thing that I keep wondering about is the number 14: Charity. He was born on the 14th and he has 14 governing his Pentagram. This indicates that Charity is an important part of his spiritual life. I have heard rumors of Donald Trump being charitable. Are they just rumors or is there truth in the rumors?